The Water Services Regulatory Board (WASREB) has released the 12th issue of Impact Report. The report is meant to give feedback to the public on how the water services sector is performing, with a view to holding to account institutions charged with service delivery. The report relies on data collected annually from Water Service Providers (WSPs) through the Water Regulation Information System (WARIS).  The 12th edition covers the period 2018/2019 and analyses the performance of 87 Water Service Providers and 47 Counties.

The average Water Coverage was 59%, which is a growth of 2 percentage points from 2017/18 where coverage was 57%.  In 2018/19 there was an additional 894,827 people, representing 229,442 households. Sewered Sanitation Coverage improved from 16% to 17%. Sewer services available remained at 32 urban centres spread across 26 counties. 21 counties have no sewer services and rely on onsite solutions. The number of sewer connections increased by 4% which was 1% decline from the previous period.

According to the Water Act 2016, WASREB is mandated to report to the public annually to promote transparency and accountability in the sector. 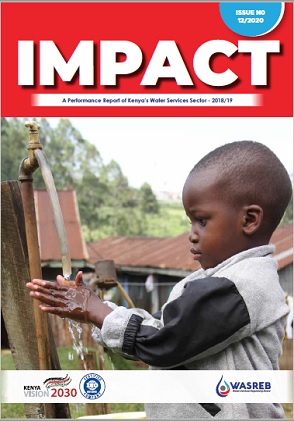